The film begins with dramatic music by Ferrante & Teicher being played on a spinning gramophone turntable. A young woman, a neighbour, enters the flat to complain about the loud music. She encounters a naked man in the bathtub – he thinks he knows her but also appears to confuse her with someone else: »Stella!« he shouts, like in Tennessee Williams A Streetcar Named Desire. A narrative voice describes empty buildings which take on a metaphorical character in the context. The confusion mounts. Lucy seems to become Stella, and she describes how she was beaten to death. But the man in the bath would also appear to have been murdered, blood is dripping down his arm. There is a Christmas tree in the flat. Inside it is snowing. The record player suddenly catches fire. Smoke, fire, blood and snow provide the film with its title. 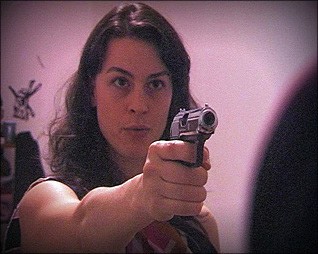 The film revolves around a conflict between a woman and a man in a domestic surrounding. The tension builds up through a peculiar and arbitrary conversation performed laconically by the charachters. The film begins with a monologue performed by the man and ends with a monologue by the woman. Do these speeches actually ever connect? Is there a space for a dialogue? The flow of speech, sentences and individual words fill up the work with their presence and create a restless yet still a determined rhythm together with the pace of the changing camera angles. The film discusses issues such as language, repetition and the power of words, as well as violence within the domestic realm. 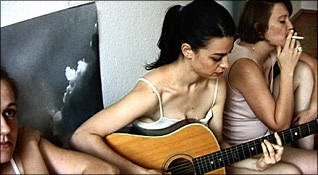 Der Spiegel takes place in an apartment. The protagonist is a woman in her forties caught in a love triangle of unrequited love. In addition, a choir consisting of three women reflects on the situation, comments on the key issues of the film and addresses the viewer. The woman in Cytter’s film is a reference to John Cassavetes’ movie Opening Night (1977), where Gena Rowlands portrays a film star who, with a similar fear of aging. She suffers a personal crisis and succumbs to alcohol and hallucinations. Using a hand-held camera, as Cassavetes does in his film, Keren Cytter aims to create a realistic perception for the viewer. 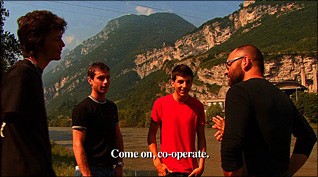 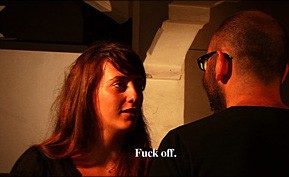 These two films are easily confused. They employ the same actors and were filmed in the same setting but use different scripts. Taking their inspiration from Pier Paulo Pasolini and Federico Fellini, the films explore the image of Italy as it is presented in the work of these directors. Moral and religious issues are discussed. The romantic and the realistic collide head-on in the interaction of the characters. The professor reading poetry aloud is told off by a man trying to take a nap in the grass.

Repulsion, which is based on the film of the same name by Roman Polanski, consists of three simultaneously presented scenarios. The piece discusses themes of alienation, claustrophobia, paranoia and revulsion, which are mediated through the character of a young woman who gradually loses her sense of reality. The tension and the ominous tone are palpable from the very beginning. Cytter plays with her characters as she mixes up the roles of the victim, the murderer and the witness by presenting three different endings. What interests Cytter the most is not a logical and congruent storyline, but instead the arbitrary though still decisive actions and gestures performed by her characters.

Dreamtalk focuses on the relationship of a couple and their »best ugly friend« Mark – a love triangle with no winner in the end. Mark is in love with his friend’s girlfriend Jen, but she is only interested in her »perfect« boyfriend. Her boyfriend, however, has only eyes for Sandra, a character on a tv reality show, whereas Jen is being ignored by him. The action is reminiscent of a soap opera episode, set in a simple and commonplace kitchen. Additionally their story correlates with the tv show’s plot which deals with the same dilemma. The film is filled with dialogue, whereas the poly-vocal narration and the chanting of the lines, as if recited, create a feeling of detachment between the characters and leave the viewer wondering what is actual speech and what are the actors’ thoughts. 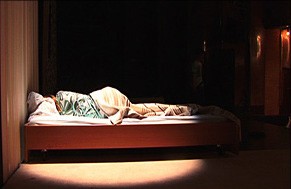 The film Untitled (2009) is one of Keren Cytter’s recent works and was made for the 2009 Venice Biennale. It is based on the true story of a boy who shot his father’s lover out of jealousy. However, the film doesn’t simply focus on the narration of the story, but allows the viewer instead to witness the characters’ emotional moments of grief, rage and despair. Inspired by John Cassavetes’s movie Opening Night (1977), the film presents a woman preparing to go on stage as she confronts her own life. For this movie, Cytter used both amateur and professional German actors. The scenes were shot at the »Hebbel am Ufer Theater« in Berlin.

Keren Cytter found her source material for this film in Blow-Up by Michelangelo Antonioni (1966) and in the short story Las Babas del Diablo by Julio Cortázar. Just as in Antonioni’s film, Cytter uses the snapshot of a couple in a park as the starting point for her story, only to turn it in a different direction. She borrows a few lines from Cortazár’s text to form a brief voice-over. The two characters, a man and a woman, embody Cortázar’s thought experiment by telling the story both to themselves and the viewers while simultaneously enacting it. Flowing water is a recurrent element in the film, as are cigarette smoke and lamps that are switched on and off, metaphors perhaps for the shifting of identities and of states of mind and body.

Director’s statement: »I tried to create a film that will represent the constant shifting of the mind. I did so by changing characters and narratives and shifting them from one place to another while at the same time maintaining in the appearance of the actors and the script that everything is ›as usual‹. The film focuses on the identity crises of youth (and on Daphne’s sense-of-self in particular) and shows different actresses playing the characters of Daphne and Roos in the various scenes. The things that happen to the characters affect them with the same emotional force as something they had seen on television or found out about on the net. It is in this sense that the emotional and psychological world constructed by the film is aware of itself as an artifice, as a filmic narrative.«

Films in the exhibition

1. Four Seasons (2009)
The film begins with dramatic music by Ferrante & Teicher being played on a spinning gramophone turntable. A young woman, …