Moderna Museet is open, but your visit may be a little different. We have taken measures to protect visitors from the corona virus. Please read through these measures before your visit

With unusual psychological and painterly brilliance, Alice Neel (1900-1984) painted the most interesting subject she could imagine: people. In recent years her portraits, including self-portraits, have become highly appreciated by younger generations.

“Regardless of whether I am painting or not, I have an immense fascination for humanity. Even when I´m not working, I´m analysing people.”

Alice Neel was a pioneer among American women artists. Doggedly pursuing a career as a painter of people or, in her own words, ‘a collector of souls’, Neel was never fashionable nor in step with avant-garde movements. Although one can identify stylistic influences on her early work, particularly from northern Europe and Scandinavia – for example Otto Dix and Edvard Munch – she painted in a style and with an approach distinctively her own.

Born in 1900, Neel’s early career was severely marked by a personal crisis precipitated by the death of her first born at the age of two and her failing marriage to a Cuban painter, Carlos Enriquez. Her second child by Carlos was taken into care by his parents in Cuba. By 1930 she suffered a nervous breakdown and was hospitalised. On leaving she returned to painting and began to paint her friends like Nadya and Nona. Nadya’s real name was Edna Meisner but, as a graphologist, she took an alias to sound more exotic. For Neel she ‘represented decadence’ which is a characteristic of German Neue Sachlichkeit painting. 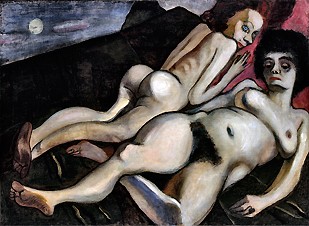 In the 1930s Neel lived in Greenwich Village and mixed mostly in literary and left wing circles. A member of the Artists’ Congress, in 1933 she enrolled in the Public Works of Art Program, a government funded project intended to give out-of-work artists financial support in return for works of art. When this was disbanded she signed up to the Works Progress Administration by which she was required to paint urban scenes. In addition many of her paintings in this period have strong autobiographical allusions relating to childbirth, infant mortality, urban poverty and political protest.

Greenwich Village felt like a cloistered environment to Neel and in 1938 she moved to Spanish Harlem in search of ‘the truth’. She was already in a relationship with a Puerto Rican singer, Jose Santiago Negron, and, in 1939, having suffered a miscarriage two years previously, she gave birth to a boy, Neel, subsequently to be named Richard. Three months later Jose abandoned her.

On the Upper East Side, as well as her friends, Neel painted neighbours and chance acquaintances. The truth she was after was all around her; immigrants suffering hardship during the economic depression and war. The Spanish Family, 1943, which recalls Manet’s Gare St Lazare in its depiction of a mother and child in front of railings, is typical of Neel’s unsentimental portrayal of low life. Whereas Manet took an oblique view of the figures, Neel faced them head on, not flinching from confrontation with the immigrant family’s plight.

The portrayal of a mother and children, absent a father, might signify an unconscious self-identification. In 1941 Neel gave birth to a second son, Hartley, fathered by the photographer and film-maker, Sam Brody. Brody lived off and on with Neel over the next two decades but undoubtedly the responsibility for bringing up the children was left to Neel. The boys loomed large in her life and she painted intense portraits of them such as Richard at Age Five, 1944. Neel rarely received commissions to paint portraits and her works, when she managed to sell them, commanded low prices. Her solo shows in 1938 and 1944 were not a success.

In the 1950s Neel was under investigation owing to her periodic involvement with the Communist Party. These were anxious times for left wing sympathisers. As the painter, Jospeh Solman, wrote in the brochure for her 1950 exhibition: ‘At times, an element of foreboding, akin to that in the work of Munch, creeps into her work; and there are portraits that are almost vivisections.’
Neel attended meetings at the Abstract Artists Club and it was there she met the writer, poet and curator Frank O’Hara, one of Jackson Pollock’s chief apologists who, in 1960, became a curator at the Museum of Modern Art. O’Hara agreed to pose for her. She made two portraits, one a ‘romantic falconlike profile with a bunch of lilacs’, which took four sittings, and the second, shown here, which was accomplished in one day. ‘I started with the mouth’, she has explained. ‘His teeth looked like tombstones; the lilacs had withered. … The reason I wanted to do the second one was because when he came to the door he looked beat. I feel that it expressed his troubled life more than the first [portrait].’ O’Hara was an active homosexual which was hazardous in the United States. Homosexuality was regarded as a mental illness and a criminal offence. In subsequent years, Neel painted many portraits of homosexual men and women. The portrait of O’Hara, its reproduction in Art News, edited by Thomas Hess, the champion of Abstract Expressionism, and an article in the same magazine in 1962, signified entry into the art world. It was not long before Neel began to paint portraits of other artists – the young Robert Smithson, Andy Warhol and Duane Hanson among them – as well as such curators as Henry Geldzahler, a supporter of Pop Art.

Neel’s choice of sitters seems in part to have been strategic but she left an unparalleled painted record of the New York scene in the 1960s and 1970s. Her success was marked by a solo exhibition at the Whitney Museum of American Art in 1974, a rare honour for a female artist, and she became something of a feminist icon in the heyday of the Women’s Liberation Movement. Uninhibited by convention Neel took on a subject that hitherto had been almost exclusively the domain of male artists, the female nude. In Pregnant Woman 1971 Neel marginalises the male and focuses not on the sexual aspect of the female figure but the burden of pregnancy. The woman is alone in her plight. Pregnancy is a female experience that cannot be shared. Her areolas are enlarged and her nipples are erect, not out of arousal, but as a condition of her state of fecundity. She is ready to lactate as soon as the pressurised womb will give up its burden. The palpable tension of this painting, signified by the ballooning belly, stretched like a drumhead, the potential of the breasts and the apprehensive expression of Neel’s daughter-in-law, is in stark contrast to the relaxed manner of John Perreault.

Perreault, a gay curator, was organising a show on the theme of the male nude at the New York School of Visual Art. He asked Neel to lend her 1933 painting of Joe Gould. She agreed as long as he would also include a recent work but, since she had no male nudes, he offered to pose. The portrayal of Gould had focused on his penis, which appeared three times in the portrait. Neel’s concentration on the flaccid male member and bulbous testicles in the Perreault portrait not only displays a refreshing candour but is a reprise of the Gould painting. Perreault’s location on a white sheet and his brazen confrontation with the viewer, ironically echoing Manet’s Olympia, makes Perreault into a modern day rentboy displaying his assets. Neel’s concentration on his body hair and the overt display of his armpit also parodies, perhaps unknowingly, Manet’s depiction of the hair in Olympia’s axilla.

Candour is probably the overriding characteristic of Neel’s art. Her depiction of Don Perlis, an artist, and his son Jonathan, a variation on the theme of mother and child that preoccupied her throughout her career, does not flinch from the portrayal of Jonathan’s disability. He is a wounded creature.

Since her death in 1984 there has been a revival of interest in Neel’s art, not least because of renewed interest in figurative painting and a realisation that there are many different ways to narrate the history of modern art. Among contemporary painters Marlene Dumas and Elizabeth Peyton regard her as a crucial, pioneering influence. As Peyton has written: ‘It is very hard to comprehend the depth of the struggle that Alice Neel went through to make her paintings. It is painful to think about that, and it always makes me angry. How could anyone deny the importance of what she did?’

Moderna Museet Now is supported by