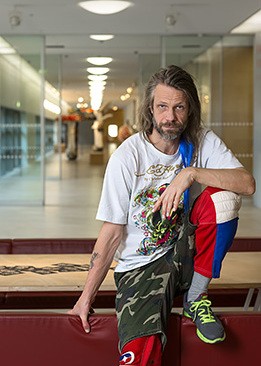 La Substance, but in English – previous works in this series or this operating system were called EPIC, The Nature, and The Ocean, and (with the exception perhaps of EPIC) like La Substance, they are capacities that are not divisible, like a clock or a life. The intention is that the performance will give an experience that is not narrated, not a line, a set of scenes or components. The performances are, as in are, and they exist like the ocean, which is one united whole – something entirely superior that encompasses everything – there are lots of things in the ocean, but the ocean is always one. As in The Nature, which is something our minds cannot grasp – we don’t have access to Nature – we can walk around in nature – but what we experience is, according to post-structuralism, nature as a representation, not Nature on its own terms. The Substance – beginning with The – or La – refers to Plato and the Greeks and their ideas on substance as the indivisible primordial matter that is one, what everything comes from – so to speak – and can be directly associated with metaphysics, transcendence, eternity and the never-changing. That is precisely what this performance is, an eternity, an infinity, the absolute security that will be there forever, in eternity, but also, in order to be that, is completely independent of humankind, time, weather and wind.

More about this program

Mårten Spångberg about La Substance, but in English

Mårten Spångberg about La Substance, but in English

La Substance, but in English – previous works in this series or this operating system …