Moderna Museet is open, but your visit may be a little different. We have taken measures to protect visitors from the corona virus. Please read through these measures before your visit

29 September – 2 December 2007 Artist and experimental filmmaker Gunvor Nelson (b 1931) is one of the most prominent women filmmakers of “New American Cinema”. She moved to the USA back in the 1950s and was a professor of film at the legendary art college San Francisco Art Institute until 1992. Curator: Cecilia Widenheim
Read more 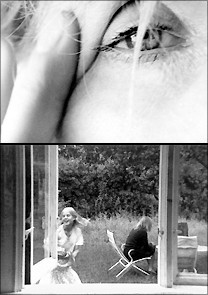 Over the years, Gunvor Nelson has developed a uniquely personal way of making films, in which collage features are intermingled with suggestive landscapes created by sound and image.

With humour and an acutely critical eye, Gunvor Nelson’s earliest films explored the stereotyped images of women in the media. Today, films such as SCHMEERGUNTZ (1966) and TAKE OFF (1972) are considered feminist classics in the history of film. Generation shifts, time and ageing are some of the themes that characterise works such as MY NAME IS OONA (1969), RED SHIFT (1984), TIME BEING (1991) and TRUE TO LIFE (2006).

Gunvor Nelson’s films have had numerous international screenings. Last year, a film programme of her work was shown in, among others, San Francisco, Chicago and at the Museum of Modern Art, New York. Moderna Museet will have daily screenings of Gunvor Nelson’s films and videos in the Video Corridor and in the Collection exhibition, as well as in the Cinema on Sundays at 2 pm.

We thank The Foundation for The Culture of the Future, Re:Voir Paris and Filmform for their support of the project.

1. You moved to the USA in the 1950s to study painting, among other things, but eventually film became your primary medium of …

Film Evenings at Moderna
- in conjunction with the exhibition Gunvor Nelson