The museum is temporarily closed due to the situation with the corona virus. We will be open again, starting from June 16, 2020. Read more about Moderna Museet’s precautions

We are proud to announce that the Gutai artist Sadaharu Horio will be visiting Moderna Museet with four of his assistants towards the end of the exhibition period of Explosion! Painting as Action.

They all live in Kobe, Japan, and will be in Stockholm for a week. Horio will be giving a number of different performances of both a subtle and an explosive nature. His tools of trade range from ink and brush to a crane and a falling sheet metal! He will also be collaborating with Moderna Museet’s art educators in their Sunday family activities. This is a great opportunity if you have kids. Share an unforgettable experience, building an art installation in the Bucky Dome!

Sadaharu Horio was born in 1939. He is the youngest of the Gutai artists presented in Moderna Museet’s comprehensive exhibition of artists working in the borderland between painting and performance. Horio first exhibited his works in 1965, in the 15th Gutai Art Exhibition at the Gutai Pinacotheca in Osaka. He joined the group the following year, and remained a member until the group dissolved in 1972. He is a highly-productive artist, with a perpetual work-flow. Atarimae no koto (A Matter of Course) is the umbrella name of his working method and several of his pieces. Artistic work is as innate to Horio as breathing. It is natural, and thus his art also becomes an innate part of his waking hours. 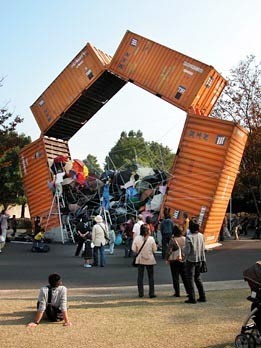 To provide for his family, Horio had a day-job at the Mitsubishi factory in Kobe until 1998. Despite the heavy factory work, he dedicated his evenings and spare time to art. Starting in 2000, he has had more and more opportunities to exhibit both at home and internationally. In 2011 he exhibited at Palazzo Fortuny in Venice. The pictures shown here are from his hometown Kobe. The project was carried out close to where he was living. It is called Museum of the Air and took place in 2003-2004. The result of another performance is also shown here. It is called Matter of Course, Luc “Umbrella” Deleu, and was presented in 2005 at the Yokohama International Triennial of Contemporary Art.

Performances on various sites in or outside Moderna Museet with Sadaharu Horio.

2 pm
At the staircase between floor 4 and 2. Horio walks on paper, sound appears.

In the entrance on floor 4, paper on the floor, Horio places pebbels with ink on it.

In the alley between Moderna Museet and Östasiatiska (Tyghusgången), Horio pulls an elastic between the sculpture by Dan Graham and a tree in the other end of the alley, the distance is mesured.

At the entrance to the museum, Horio drops water from a bucket while walking towards the street, the audience interacts.

3.30 pm
On the side of the museum facing the water at the big open space, a truck with a crane lifts a big wall, that is thrown on a big piece of paper prepared with small bags filled with colour. The wall is lifted from the paper and we see the result.

In the brick sculpture by Per Kirkeby on the side of the museum facing the water, Horio swings wet towels at the walls of the sculpture, the audience writes with chalk in the water traces.

From the terrace at the restaurant to the quay, Horio attach a tread at the terrace and walks with it towards the quay, the audience guesses the length of the tread and the closest guess recieves a gift.

5 pm
At the sculpture by Dan Graham at the front of the museum, Horio has constructed an art machine, the audience puts 10 SEK in a slot, chooses between different art works and the machine delivers your art work.

6.30 pm
From the main entrance to the garden. Ending performance.

Family Sunday with children and adults in the garden and in Bucky Dome.

In the Bucky Dome, Horio drips colour in circles on paper on the floor, children clashes containers with colours.

In the Bucky Dome, news papers are attached to bambu sticks, children can paint on them with brushes.

In the garden, children and adults makes balls of newspapers and they are spread in the garden. Children collects the balls and put them into figures made of cloth.

Come to the finale and see art in the borderland between painting and performance, attend performances, take part in discussions and voice your …

Works in the exhibition

Works in the exhibition

Ignasi Aballí (1958)
Ignasi Aballí’s work Persones consists of a long line of dirty footprints along a wall. They were made by the artist leaning …