LIMITED AMOUNT OF VISITORS. We have free admission but to guarantee your visit we recommend pre-booking of tickets. Please book your ticket here. 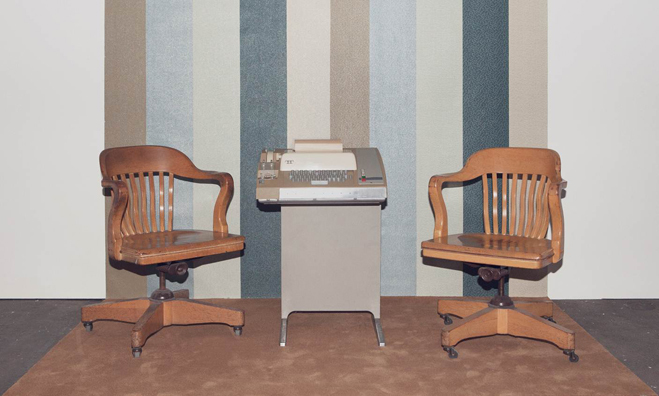 In the second part of this autumn’s specially curated evenings with performance and artist presentations that emanates from The Moderna Exhibition 2014 – Society Acts, Act II, we will meet Ugnius Gelguda, Neringa Černiauskaitė and Anna Lundh.

Under the title Shapeshifter, Heartbreaker. On the Ecology of Algorithms, the Lithuanian artist duo Ugnius Gelguda and Neringa Černiauskaitė (aka Pakui Hardware) will give a performance lecture that spans around the relationship between materiality, technology, and economy. How is technology shaping current economy and the physical reality itself, including the human body?  In relation to the velocity of technological development, the matter becomes both an obstacle and a vehicle. These questions are analyzed through such examples as High Frequency Trading, technological prosthesis and digital materiality.

During Act II Anna Lundh (SE) will perform Q&Q – 2022 from the year 2012. The first Q in the title references a project called Telex: Q&A, originally devised by New York based E.A.T. (Experiments in Art and Technology) in 1971, as part of the exhibition Utopia & Visions 1971-1981, held at Moderna Museet in Stockholm. Visitors were instructed to fomulate questions and answers about 1981 – ten years from then – using Telex machines set up in Stockholm, Tokyo, Ahmedabad and New York). The second Q in the title stands for the new questions that we will produce now (2012 about 2022).

Installed as a week-long experiment in March, 2012, in the exhibition series COLLECTIVE/PERFORMATIVE at Exit Art in New York City, the audience were invited to ask questions, individually or together with other participants. The incoming questions were also displayed, to inspire and generate new questions. The week included workshops, where the participants not only were invited to fomulate questions but also to attempt specululations. The week concluded with a ”Q&Q” session with Anna Lundh and Julie Martin – a performative reading of the old and the new questions.

Moderna Museet Malmö 14 November, 5-8 pm. Act II is included in the entrance fee. All presentations will be held in English.

Opening of two new exhibitions on May 15!

Now the museum is closed until May 15, when we reopen with two new exhibitions! After showing “Hilma af Klint – Artist, Researcher, Medium” for …

We will reopen the museum on March 16. The exhibition “Hilma af Klint – Artist, Researcher, Medium” has been extended until 11 …

After waiting through a shutdown period of more than two months, Hilma af Klint – Artist, Researcher, Medium was finally able to open on June 16. As …

What goes on in an art museum when it’s closed to visitors? And what are the new director of Moderna Museet, Gitte Ørskou’s thoughts on art and …

We hope you know you can keep track of our exhibitions from home? There is much for you to experience in our digital channels. We offer you …

“Bookstart” – a project for our youngest

Art can be a way of stimulating the language development of young children. As one of four Skåne museums, Moderna Museet Malmö participates in the …

Read this before your visit

Installation period: we are preparing for Hilma af Klint

From March 10 to April 3, we are installing our next exhibition “Hilma af Klint – Artist, Researcher, Medium”. During this period, …

Moderna Museet Malmö is a partner in the international project – GoDemo

Signals show that younger generations must practice historical awareness and reflect on prejudices and perceptions in meetings with each other. How …

This year it’s ten years since we cut the cord and opened the Moderna Museet Malmö. We’re celebrating with a jubilee weekend—throwing a big …

The exhibition Warhol 1968, currently on view in our Turbine Hall, is attracting huge numbers of visitors to the museum. This summer, we will launch a …

Moderna Museet Malmö presents a lecture on avant-garde art and urban planning in the afternoon 30 August. In context of the the ongoing exhibition …

Spend your Easter holiday surrounded by art! The museum is open and offers two exhibitions and workshops for young and old. And of course, the …

Holidays at the museum

Visit Moderna Museet Malmö during the holidays. Enjoy our inspiring exhibitions and a drop-in workshop! …

For the sixth time the Fredrik Roos Art Grant ceremony is being hosted by Moderna Museet Malmö. With a total award of 600,000 SEK (about 63,000 …

Signing of documents at today’s press conference at Moderna Museet Malmö. We are very happy to announce that Region Skåne and the City of …

What do you think is important today? What is the statement you wish to convey? Weave your statement or your opinion in the workshop. …

The exhibition Objects and Bodies at Rest and in Movement, at Moderna Museet Malmö, presents dance constructions of the …