You need to prebook tickets to the exhibition Giacometti, this includes children and others with free admission

At first glance, Michaël Borremans’ paintings may appear accessible, not to say seductive. The realistic and technically advanced oil paintings, with their soft tones, lure viewers into thinking that the motif is familiar, since they can “see what it is”. But the more we study the paintings, the more uncertain we become about what we are actually seeing.

The paintings often portray people serenely absorbed, bent over some task that remains enigmatic. If they are using their hands, it is in some way that is hidden, invisible and unfathomable.

The painting The Pupils (2001) is a perfect example. The title can mean both students and the centre of the eye, an intentional double entendre. It shows three young men, sitting in a row, dressed in some kind of overalls. In their laps they each have a head over which they are bent. At first, they look like dentists, or as if they were applying makeup to the faces before them. The edges of the painting are dark and vague, but a closer look reveals that the heads appear to lack bodies and resemble the men holding them. Thin lines are drawn between the eyes of the young men and the eyes of the heads, marking the direction of the gaze or some form of transmission. The hairstyles and clothes indicate that the scene is set some time in the 1930s or 1940s, which is significant of Borremans’ paintings.

The figures in Borremans’ works are often isolated from the background, the context – without any setting that could disclose where they belong. An oppressive, uncomfortable atmosphere tends to prevail in many of the scenes. Despite their calm and concentration, they are nonetheless often bizarre and absurd. In The Advantage (2001) we see a man dressed in what appears to be a straitjacket. Is the title an irony relating to the man’s hopeless predicament, or is the artist saying that his restricted possibilities are truly an advantage? The dark humour is merciless.

The drawings and watercolours are more fantastical, more redolent of speculation and vision. While Borremans regards them as autonomous works of art in their own right, it could be said that their being drawings and sketches is thematised or emphasised so that they often appear to be ideas or drafts for future public embellishments.

Titles such as The Conman, Deception, Trickland, to mention but a few, deal with fraud, appearances and reality. The drawings especially conjure up a world of models and shadows. The problem was formulated long ago by Plato in his definition of art as depiction (mimesis). A depiction can never be identical with the depicted and is, in other words, never perfect, always defective. 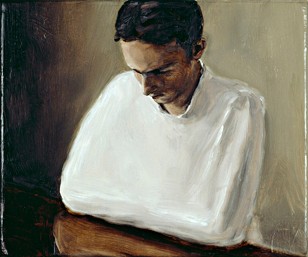 A few of Borreman’s paintings and drawings evoke the scientific collections of artefacts from the past, of the exhibits in museums of natural history or educational wall charts, featuring such things as small, sawn-off birch trunks but also human beings. In these, the individuals are displayed as examples of something, not for their intrinsic value. Slight Modifications (2001) is a list of various ways to disfigure the mouth. A recurring theme is a large disc protruding from the mouth and a range of different gags. The figures are grotesque, robbed of any possibility to talk, eat or drink. The word “slight” in the title appears, again, to be a cruel irony. The scientific, objective approach seems to involve a callous indifference to human suffering. The drawings occasionally take the form of quasi-scientific illustrations on how to perform certain measures. The absurd incomprehensibility and pointlessness of the often cruel practices can be interpreted as a critique against the didactic ambitions of the Enlightenment. Twenty-three Metaphors (2001) shows a wall with immense stuffed swallows in what appears to be a museum hall. Their ability to fly, not to mention life, has been taken from them in the name of science.

2008
If It Appears in the Desert, Contemporary Fine Arts, Berlin [DE]

The American artist Lucas Ajemian was born in 1975 and lives and works in New York. He was not yet born when the British heavy metal group Black …

At first glance, Michaël Borremans’ paintings may appear accessible, not to say seductive. The realistic and technically advanced oil paintings, …

In Le surréalisme (1950) Yvonne Duplessis writes: Humour is not characteristic only of those who do not let themselves be blinded by reality. It also …

In Ellen Gallagher’s DeLuxe we witness a collapse of time. Historical and mythological characters are merged and re-animated to create a single …

Paul McCarthy examines and challenges the taboos of western civilisation. Human and bodily boundaries are also transgressed in his art. His paintings …

Tom McCarthy is both a writer and an artist, in a combination where one does not exclude the other. On the contrary, the two positions are mutually …

In one of his first videos, Intervista, Finding the Words (1998), which featured in the exhibition After the Wall at Moderna Museet in 1999, Anri Sala …

Dana Schutz’s art consists of scenes from a post-apocalyptic world where the white – American? – population has mutated into grotesque …